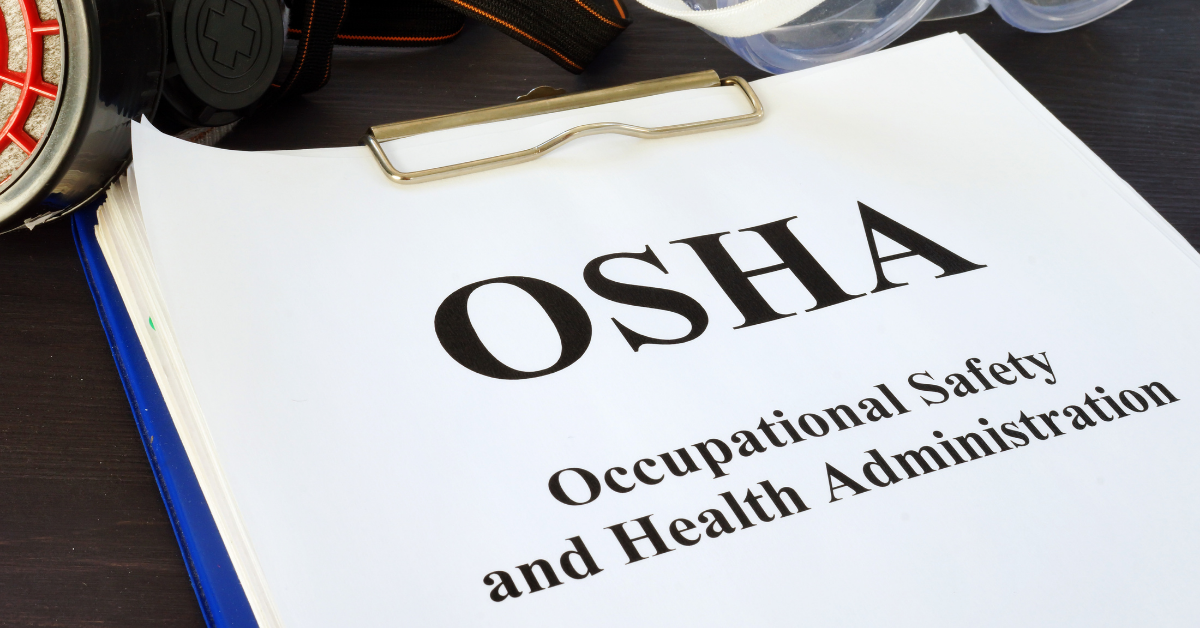 Check out our latest episode about the top 10 most commonly cited OSHA violations and what you can do to protect your workers and your business.

One of the things we talk about forever is OSHA's top 10 violations. They've been doing this since the 1980s, and what's interesting to me is that even though they published this list of the top ten cited items every single year – for the most part there's a nucleus of probably four or five or six of these items that have been on the list virtually every year since 1985. It would seem that if it kept coming up on the list of the most frequently cited violations the companies would realize this list exists, take a look at it and focus on what they should be doing and what they should be implementing to make sure that if OSHA comes in for an inspection they will be in good order for the things that OSHA cites the most frequently for. The fact of the matter is that OSHA is busy enough doing inspections of high hazard industries which they have a special targeting program for. They also investigate accidents injuries and fatalities, and probably the biggest thing I think they do is employee complaints. When they get a complaint from an employee about a safety hazard or a health hazard, they are likely to come out and conduct an inspection. If They don't think that hazard is serious, they may write to the company to ask them to investigate the accusation themselves and get back to OSHA and let them know what they've found out. But those are the three or four most likely ways that OSHA would show up at your doorstep.

They have another thing that they do when they come, and they look at facilities and determine what their loss workday incident rate is, and if it's above what they have as their standard they will conduct an inspection; if it's below it they generally will walk out the door, and they will never make it past the front office, and all those are things that you have at your control. It's interesting to note that of the top 10 things that number one is fall protection. You still find people falling off of buildings, falling off of ladders, not using man-lifts appropriately, tying off man-lifts to buildings and then trying to lift the man-lift and tipping the thing over and dumping somebody on the ground. So, fall protection is number one on their current list, and it has been on the list forever. Now the second issue is hazard communication, and this involves the use of what used to be called material safety data sheets that are now safety data sheets. The standard has changed a little bit. It is still a very cumbersome standard to comply with. But the goal of it is to educate your employees about the hazardous nature of the chemicals that they work with so that they can make intelligent decisions about how to work with those chemicals and help you protect them from the hazards that those chemicals present. The next one is scaffolding which goes along with the fall protection standard. A lot of times scaffolding is professionally erected, especially on bigger construction projects that are going to be going on for a longer period of time. A lot of smaller contractors do not erect proper scaffolding or anything that even looks like scaffolding.

The fourth item on the list is respiratory protection. That's a particular bugaboo of mind because I don't care for respirators at all generally because the only way, they're effective is if they're properly selected, properly fit, and they are the right respirator for the for the person and for the hazards that they're exposed to. And we find that probably 90 percent of the time when people are wearing respirators there's something wrong with one of those four or five criteria. You have somebody with a beard wearing a respirator, so they don't get a good face seal. They're wearing a respirator with the wrong cartridges for what they're exposed to they're wearing a respirator from one manufacturer with cartridges from a different manufacturer. So, it voids the certification on the respirator. So, if you're going to use respirators at all, you should make sure that you comply with the standard. And frankly, you don't get a lot of help from the people who sell respirators or the manufacturers of the respirators other than their online services, especially for small companies. Again, I personally just don't like respirators unless you're willing to invest some time and energy in making sure that you're providing the correct ones and that your people are using them properly. Probably one of the ones we see the most in companies that we get into is the lockout-tagout standard. The biggest thing we find is that most companies nowadays have some kind of a lockout tag out program that involves their maintenance people actually using locks more often than tags.

What ends up happening is that part of the standard requires that you have a particular written procedure for every piece of equipment that's required to have one under the standard that brings the piece of equipment from an operational state to a zero-energy state and then re-energizes it and brings it back to a full energy state, when you're done servicing the equipment or maintaining the equipment. We find that most companies do not have those written procedures and they rely on the wisdom, knowledge, experience, whatever you want to call it, of their maintenance people to know how to do that as opposed to having specific written procedures in place that detail how to do that. I think the second problem we find with lockout-tagout is the lack of training programs so that the people who are doing the lockout-tagout know by and large what they're supposed to do accurately, but a lot of people that come across the locks don't know what they're for and aren't able to help in the process of making the standard work. The next item on the list is ladders. In this day and age, you would think it would be pretty easy to have proper ladders and have them used properly. I can't tell you the number of ladders that we find all the time that are either homemade on construction sites, they've been run over by a vehicle, the legs are bent, the legs are cracked, they're using metal ladders around electrical installations and just a whole host of issues. You would think that something as simple as ladders in this day and age would be easier to deal with, but it's not. The next one, number seven, is powered industrial trucks or forklifts.

Again, we find at most companies as long as somebody can jump on a forklift in the morning and turn the key and it works it works. There's a lot more that's required in terms of dealing with forklifts. Largely including training and education for the people who are driving them, but also just the servicing maintenance and inspection of the forklift to make sure that they're going to operate safely when they put in to use. The next one is fall protection for training requirements. Again, we find people tied off with a rope around their waist, we find people who are not tied off properly at all, but they are using some kind of a tie-off device that actually becomes more of a hazard. If you were training your people properly, they would at least know if you're requiring them to do something wrong in the first place. The ninth one is machine guarding, and this is probably one of the things we see the most in the workers comp stuff that we do relative to either amputations or cuts, either machines are not guarded at all or they're very improperly guarded that make it very hard to use the equipment so that people are tending to put their fingers into the point of operation or bypass the guards altogether. In order to properly design machine guards, you shouldn't just rely on the people who make the machine and the guard that they service it with but you should actually talk to the people who use the machinery and equipment as well as the people who service the equipment to make sure that the guards that are on the equipment are workable for them.

If I have to take four or five bolts off a guard to remove it to oil the machine which takes me about two minutes, I'm probably not going to put that guard back once I take it off. There are a host of ways of redesigning guards so that they don't have to be removed for simple maintenance practices and machine guarding is something that everybody should be paying attention to. The last issue on the list is personal protective equipment and lifesaving equipment particularly they're talking about eye and face protection. This sounds crazy, but in the world of providing protection for workers, the last line of defense is personal protective equipment. If you look at the proper problem-solving techniques that are supposed to be implemented when you have safety issues on the job site, the first one is always to try to eliminate the hazard in the first place. And yet the first place that almost everybody goes to is providing personal protective equipment. Whether it's glasses, gloves, hard hats, steel-toed shoes or whatever it is you still rely on somebody using that equipment, and you rely on them keeping that equipment in proper operating condition. We find that safety glasses are one of the hardest things to police because people leave them at home. They don't wear them. They wear them up on top of their head because they don't like looking through them. They get dirty, they get sweaty and steamed up so they can't see, and we still see a number of eye injuries all over the place because people aren't properly using them. In order to have a proper personal protective equipment program, you're supposed to do a job hazard analysis of every job or task in your operation where you actually determine if personal protective equipment is needed and then if it is needed what is the proper type. Safety glasses is a good one. Are safety glasses adequate? Are they impact resistant enough for what's going on? Do they need side shields? Do you need splash goggles? Do you need chemical goggles? Do you need a full-face shield, or do you need some combination of all two or three of those things? And this is something we rarely see anybody do. They just buy safety glasses, or buy eye protection, or hearing protection, or face protection, or steel-toed boots and put them into service without ever realizing if they're actually the right equipment for the job. I would suggest since OSHA cites for these things all the time and most of these have been on the list for the last 30 years. You can go to the OSHA website and get some guidance and direction on this, or you can give us a call, and we can help you out with it.